Archon of the Ecumenical Patriarchate 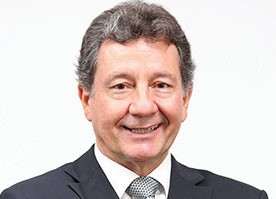 His Greek routes originate from the island of Kythera where his great Grandfather, Papa Minas  was the parish priest of the village of Karavas.

Growing up in Australia in his early youth ,he served as an altar-boy at St George –Greek Orthodox Church ,Brisbane, where his father ,Minas was one of the founding members of the Greek Community Centre .

During his earlier career as a banker in Australia, Angelo established the “Hellenic-Australia Chamber of Commerce &Industry”.(HACCI)

In November 1998,Dr Venardos was recognized as being a Major Sponsor of the Patriarchal Tour of Australia  when His All Holiness Bartholomew, visited Brisbane ,Australia

Subsequently, he has made a number of private pilgrimages to Saint George at the Phanar in Constantinople.

He later followed a similar initiative to HACCI, when he moved to Singapore in 2000  ,where he established the “Hellenic Business Network Association”(HBNA) .This Association has carried out a number of fund raising efforts for the Holy Resurrection Orthodox Cathedral in Singapore. In February 2012,Angelo   attended the enthronement of Metropolitan Konstantinos in Singapore .

Over the years, he has donated to the restoration works of three  Churches on Kythera, being Agios Haralambos, Panagia Despina and Agia Anastasia ,and new Icons for St Anna’s Church  on the Gold Coast, Australia.

Dr Venardos, in 2002 was the  Founder & Chief Executive Officer  of the Heritage Trust Group ,an international tax planning & wealth management business .The Group had offices in Singapore, Hong Kong and the Caribbean.

The business was sold in 2016, and Dr Venardos stepped down as Chairman in 2018 to pursue his private interests. He remains based in Singapore ,however he travels regularly to both Sydney-Australia and Athens-Greece where he maintains family and business ties.

Whilst in business ,he served on the  London based international Board of Directors of the  professional body, STEP  (Society of Trust and Estate Practitioners).

In 2012,he was made a Fellow of the Institute of Banking and Finance (IBF) in Singapore

He has been a member of the following institutes;

He is presently a member of AHEPA Pericles Chapter HJ10, Holargos Greece and is now planning to establish a Chapter in Singapore ,being the first in Asia

His academic qualifications include;

He has written and edited the following books;

Angelo and his wife Karen have 3 daughters- Alexandra, Christina and Camille.