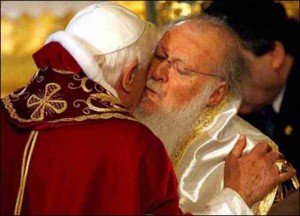 Greek Orthodox Patriarch Bartholomew I, the only Orthodox Church representative at the 50th anniversary of the Second Vatican Council, said they hoped that the barriers preventing the unity of the Eastern and Western Churches could be eliminated.

The 50th anniversary of the Second Vatican Council, in which important decisions were made about the Catholic Church’s opening up to the modern world, was marked by Pope Benedict XVI celebrating Mass on Oct. 11.

Vatican City’s St. Peter’s Square hosted more than 20,000 people for the anniversary of the Second Vatican Council, which began in 1962. The Mass also marked the beginning of the “Year of Faith.” Around 400 cardinals, religious officials and many diplomats from various countries attended the Mass, where Vatican Ambassador Kenan Gürsoy represented Turkey. During the Mass, Bartholomew I was on the pope’s right side, while Anglican Church Canterbury Archbishop Rowan Williams was on his left side.

Bartholomew: Our journey was not easy

In his speech, Benedict XVI underlined the importance of the Second Vatican Council, which was organized by Pope John XXIII, adding that decadence and self indulgence have risen in the last 10 years, and there is more need for belief than 50 years ago. It was essential to understand the soul of the council, the pope said. He said he had observed that the world is experiencing a godless period, as it was in the post-World War II period.

“Our journey was not an easy and costless one. We suffered from pain and difficulties,” Bartholomew I said. “Thank God the archbishops in the same council accepted the importance of sincere dialogue between us, the ‘brother churches.’ We all hope that the barriers between the Eastern and Western Churches will be eliminated,” he said.

Benedict XVI offered a blessing in the Arabic language for the first time during his weekly address in St. Peter’s Square on Oct. 10. Arabic was used officially after the other 11 languages in the ceremony.

“The pope prays for everyone who speaks Arabic. May God protect you all,” he said. Vatican press spokesman Padre Federico Lombardi said this new practice is the continuation of the pope’s visit to Lebanon. “The pope thus reminded everyone the necessity of praying for peace in the region and showed that he still cared for the Christians in the Middle East,” Lombardi said.