The Presentation of Christ in the Temple

This feast, celebrated on February 2, is known in the Orthodox Church as The Presentation of Christ in the Temple. Another name for the feast is The Meeting of our Lord. Roman Catholic and Protestant Christians call the feast, The Purification of the Holy Virgin. About 450 AD in Jerusalem, people began the custom of holding lighted candles during the Divine Liturgy of this feast day. Therefore, some churches in the West refer to this holy day as Candlemas. The Feast of the Presentation concludes the observances related to the Nativity of Christ, a period that opened on November 15 with the beginning of the Nativity fast.

The story of the Presentation is told in Luke 2:22-29. Mary and Joseph were faithful Jews and observed their religious customs. An important custom was for the couple to take their first-born son to the Temple. The baby was taken to the Temple forty days after his birth and was dedicated to God. In addition, if the parents were wealthy, they were to bring a lamb and a young pigeon or a turtle dove to be offered as a sacrifice at the Temple. The custom provided that if the parents were poor, they were to offer two pigeons or two turtle doves for the sacrifice.

Joseph and Mary were not wealthy, so they took two turtle doves with them to offer as a sacrifice at the Temple.

When Jesus was forty days old, Mary and Joseph took Him to the Temple in Jerusalem. They were not wealthy, so they took two turtle doves with them to offer as a sacrifice at the Temple. As they arrived at the Temple, Mary and Joseph were met by a very old man named Simeon. He was a holy man and was noted as a very intelligent scholar. Simeon spent much time studying about the prophets of Israel. It was during his studies that he learned of the coming of the Messiah. The Jewish people were waiting for the Messiah to come and deliver Israel from their conquerors. From that time on, Simeon spent his time praying for the Messiah to come. He spent many years in prayer. Finally, while Simeon was praying he heard the voice of God. God promised Simeon that he would not die until he had seen the Messiah.When Simeon saw Jesus, he took the baby in his arms and blessed the Lord and said:

“Lord, now let Your servant go in peace according to Your promise, because my eyes have seen Your salvation which you have prepared before the face of all peoples, a light to bring revelation to the Gentiles, and the glory to your people Israel.” 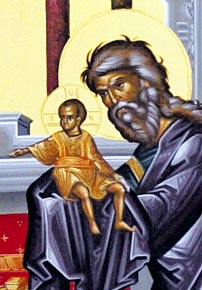 Simeon took Jesus in his arms and praised God.

Also, in the Temple was Anna the Prophetess. She had been a widow for many years. Anna was about eighty-four years old and spent her time in the Temple worshiping, fasting, and praying. When she saw the Christ Child she praised God and spoke of him to all who were awaiting the Messiah.

After Jesus was presented in the Temple, the family returned to Galilee to the town of Nazareth. The Bible tells us that Jesus grew and became strong, and was filled with wisdom.

Icon of the Feast

The Holy Icon shows that the meeting takes place inside the Temple and in front of the altar. The altar has a book or a scroll on it and is covered by a canopy. The Theotokos stands to the left and is holding out her hands in a gesture of offering. The one hand of the Theotokos is covered by her cloak or as it is known, the maphorion. She has just handed her Son to Simeon.

The Theotokos is holding out her hands in a gesture of offering and humility.

Christ is shown as a child, but He is not in swaddling clothes. He is clothed in a small dress and his legs are bare. Jesus appears to be giving a blessing. Simeon holds Jesus with both hands which are covered. This shows the reverence Simeon had for the Messiah. Simeon is bare headed and there is nothing to show that he is a priest. Some biblical scholars say that Simeon was probably a priest of the Temple or a Doctor of the Law. 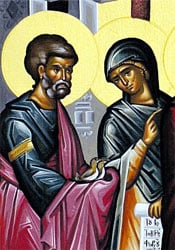 Joseph offers the sacrifice of a poor family while Anna the Prophetess praises God and “speaks about the child to all who were looking for the redemption of Jerusalem.” Luke 2: 38

The words Simeon spoke when he saw the Christ Child are known as “St. Simeon’s Prayer.” This prayer is sung daily at the evening Vespers services of the Orthodox Church.

In the Orthodox Church, both baby boys and baby girls are taken to the Church on the fortieth day after their birth. This is done in remembrance of the Theotokos and Joseph taking the infant Jesus to the Temple.

Orthodox Celebration of the Feast of the Presentation

The Story of the Icons by Dr. Mary Paloumpis Hallick.

PrevPreviousEcumenical Patriarch Bartholomew in “Vima” (greek newspaper): “I don’t have the right to take even one step back.
NextSaturday Before Meatfare Sunday By Nikephoros Kallistos XanthopoulosNext