CHRISTIANS IN INDIA FACING MAJOR DECLINE BECAUSE OF LOW BIRTHRATE 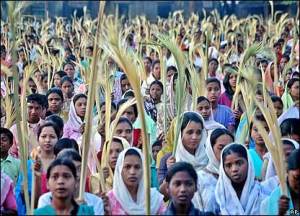 In North America and Europe the two and now even one child family has been rapidly becoming the norm. This is not surprising considering the gross materialism, weak or corrupted churches and widespread rejection of Christian beliefs in the West. It has therefore been easy to convince the public to swallow population control propaganda. It is, however, much harder to understand how a still fervent, unified Christian minority in India with a high level of religious practice and thousands of young, faithful priests and sisters to serve them, is now also experiencing a rapidly plummeting, below replacement level birthrate.

The lush southwestern Indian province of KeralaÂis relatively small by Indian standards. Its population of 31 million almost equals the entire population of Canada, but is only a small part of India’s total population of over 1 billion. However, this state has a positive influence on the education and health care systems of the rest of India, far out of proportion to its size.

What is noticeably different about Kerala is the highly visible presence of Christians, especially Catholics, in the state, the exceptional friendliness and courtesy of its people and Kerala’s strong family life culture. The still fervent Christians of Kerala, however,Âare facing a real danger that they will become practically extinct in a few generations because of their two-or-less child birthrate; this willÂcertainly become an even lower rate later, as is happening elsewhere.

Traveling through Kerala one cannot help but be startled by the many Catholic churches, huge church halls, hospitals and many large schools and colleges in almost every town and city. TheyÂnormally stand out as the cleanest, most well maintained and impressive buildings in their communities. These institutions serve all the people of Kerala, regardless of faith.

Confident, cheerful religious sisters, often young and dressed in a variety of always crisp and clean traditional habits are frequently encountered going to and from their activities. In fact, the Syro Malabar Major Archbishop, Cardinal Varkey, told LifeSiteNews.com, there are over 70,000 very active sisters in this small Indian state. 253 priests were ordained last year in Kerala and Sunday mass attendance is over 90%. The Cardinal also stated that about 70% of the Catholic missionary personnel in the whole of India come from the Kerala Syro Malabar community. All this is an astonishing contrast to almost all developed nations, where Catholic vocations and the general practice of Christian faith have practically collapsed.

Although Kerala has the highest number of Christians of any Indian state they are still an approximately 20-25% minority compared to Kerala’s Hindus and Muslims, but an influential minority. This is because they have long been the most educated of Kerala’s and India’s citizens. Thanks to Church mass education efforts this was the first Indian state to achieve near 100% literacy. Everyone goes to school here.

The Church has existed here since A.D. 52 when the apostle St. Thomas landed on its shores. That is something the Syro Malabar eastern rite Catholics and the Orthodox Christians, who both date themselves back to St. Thomas, hold very dear. There are approximately 3.5 million Syro Malabar Catholics, 2 million Latin Catholics (300 years in Kerala) and perhaps 1 1/2 million non-Catholic Christians in the state. All appear to be fervent and active.

Despite the above, one cannot help note a disturbing contradiction: fervent Christians, but only one or two child families, and most commonly a boy and a girl in each family. Christian couples here, along with the Hindus, now clearly exclude God and their Church from having any role in determining the number or even sex of their children. New life has strict conditions attached to it. They are practicing not only contraception and sterilization but, in order to achieve the one boy, one girl norm among Hindus and Christians, abortion must be widely practiced.

Catholic Church leaders are alarmed and practically resigned to what they see as the inevitable near disappearance of their flocks in India as a result of this demographic trend. They worry about the rapid rise of Islam because of the far higher Muslim birthrate. Kerala’s priests and bishops do not know what to do. They say they have preached from the pulpits on this but it has not had any effect.

No Education Organizations, Programs or Media to Counter Propaganda

LifeSiteNews.com’s interviews with several leaders provided more insight into the causes of this dilemma. We learned that there do not appear to be any education programs or lay or secular organizations to effectively counter population control and pro-abortion propaganda. The spiritual and moral is preached, but the practical and factual are not taught andÂdo not appear to be understood by the leaders, let alone the general population.

As in the West, government and media in India are overwhelmingly pro-population control and pro-abortion. However, there is no effective alternative media as now exists in the West. Internet access exists but its availability is extremely limited and of far poorer quality than in the West. So the publicÂreceives only the government (International Planned Parenthood) and media line. There is no choice whatever. Pro-life groups appear to be very sparse if they exist at all.

There is hope therefore that the current trend can be at least partially reversed. Indians, both Christian and Hindu, who co-exist remarkably well with each other in Kerala and with the Muslims, could benefit greatly from the formation and implementation of well-developed education programs about the real purposes, flawed arguments and enormous harm of international de-population programs.

Education about the realities and harm of abortion are also crucial. The schools especially would be the place to present such factual programs to inform the new generations who would convey that information to their parents and to the wider community. Because of the genuine fervor and internal unity of the Christian Churches and close cooperation among all faiths, such programs could have far more success here in Kerala than in the West.

This writer believes that India’s Christians and their fellow citizens of like mind still have a window of perhaps 5 to 10 years before their way of life and all its enormous benefits to India will begin its inevitable wrenching collapse if current trends continue.

Follow up reports will provide further insight on this issue as well as report the in-person interviews with Major Archbishop Cardinal Verkay, a small city parish priest, and a protestant pastor in another small community.

Note:Â It is difficult to obtain an accurate estimate of the total number of Christians in all of India. Government, church and media estimates that we have seen vary from 1.8% to a high of 4% as reported in The Hindu newspaper this week.

By Steve Jalsevac in Kerala, India