The Three Hierarchs and Education 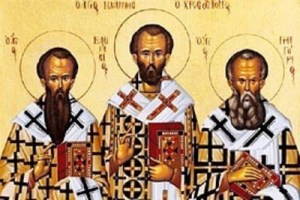 Since then, it has been customary for the feast of the Three Hierarchs to be associated with education and Greek letters, even through the time of the Turkish occupation, when it assumed a national character. It appeared to the Turks to be a religious feast and a day when the progress of students was checked, but in fact the priests/teachers used it to cultivate the desire for freedom in Greek children.

After the liberation, it was recognized officially as the greatest feast for Greek schools and for education more generally, first by the University of Athens, with a motion by the Senate in the academic year 1843-4, and then later, by law, by the Greek state.

Within the strict limits of an article, it is not possible to present the fullness of the multi-faceted work and enormous contribution of the Three Hierarchs, which is why we shall present only a few, mainly practical, points regarding their relationship to education and the training of young people.

From childhood, all three Fathers loved education whole-heartedly, sought knowledge and devoted themselves earnestly to learning. After the general education he was given by his father, Basil the Great studied in the famous schools of Caesarea, later pursuing higher studies in Constantinople. In 351, he moved to Athens, where he studied rhetoric, philosophy, dialectics, astronomy, geometry and medicine. In his works, particularly the Hexameron, he later displayed his expert grasp of Greek discourse, his astonishing familiarity with ancient Greek philosophers and his knowledge of the scientific data of his time.

Saint Gregory was probably given his general education in Nazianzos and continued his studies in Caesarea, Alexandria and Athens. In Athens he was a fellow-student of Basil the Great and studied philosophy, rhetoric, music, astronomy and geometry with unusual enthusiasm. He impressed his teachers so greatly that, on the completion of his studies, they forced him to remain in Athens and teach philosophy and rhetoric. He proved to be incomparable in his use of the Attic dialect, a great poet and author and a fascinating speaker.

Saint John studied in Antioch under the famous philosophers Andragathios and Libanios. Immediately after his studies, he practiced as a lawyer and proved to be “most proficient at speaking and convincing”. He is considered the greatest orator of all times. He was awarded the soubriquet “Golden-Mouthed” because of his eloquence and the power of his speeches.

Despite the fact that all three devoted their talents and abilities to the service of Christ’s Gospel, they did not turn their backs on secular wisdom. They recommended the serious study of all academic subjects and, moreover, emphasized the value of Greek wisdom. Not only did they not oppose the ancient Greek spirit- any more than all the other Fathers of the Church- they also adopted the positive elements of Hellenism. They used many views and theories of Greek philosophy in the best possible way, without, of course, altering the revelation of the Orthodox Christian truth. The Fathers wrote against the deception of idolatry, not against Greek education.

Saint Gregory the Theologian rang the praises of Greek education, advising young men of his time to read everything, but to reject anything to do with idolatry. He even went so far as to set out the way they should be trained, in other words, the manner in which a Christian should have ancient literature as a teacher, using Caesarius, the brother of Basil the Great, as an example. Caesarius sought every virtue and all learning. He studied rhetoric, medicine, geometry and astronomy, though never allowing himself to be affected by the dangerous deception of astrology, which leads to idolatry.

In his wonderful work To Young People, on the Beneficial Study of Greek Texts, Basil the Great recommends the judicious use of Greek philosophy, which he calls “the antechamber of the Christian way of life”. He considered anyone who had not studied the legacy of Greek thought and intellection to be uneducated. You can find all the great thinkers of antiquity- Plato, Aristotle, the Stoics, Plutarch, Plotinus and others- whispering in his works.

The three hierarchs proved to be incomparable educators. Their advice and precepts to both parents and children are still applicable to this day. Saint John emphasized that education is superior to any other profession, because it has to do with forming souls. He urged educators to demonstrate their love for their students while they were teaching and to respect and recognize the specific traits of each one. He focused on the character of the teacher and recommended that anyone wishing to undertake the task of educator should be compassionate, self-effacing, willing to sacrifice themselves and be free of pride and arrogance. Moreover, they should always confirm what they taught with their own, personal example.

Basil the Great was even more practical as regards his educational precepts. He suggested that schools should be built in quiet places and that teachers should try to attract the confidence of their students. During the lesson, the teacher should make himself clear and be brief, though not so much so that that the students would be unable to retain what he said. He pointed out to educators that they should not deal with more than one subject at any one time; should repeat what they have said; not attempt to prove what is obvious and self-evident; should use lots of examples; and generally teach in the capacity of a guide.

The holy Father was also a pioneer of professional orientation. He urged parents and educators to take into account whatever leanings a child had towards a particular skill. They should conscientiously test the abilities of any child and then choose the most suitable teacher or artisan for an apprenticeship. Even though Basil the Great condemned excessive and indulgent concern with the body, he did not forbid exercise. Indeed, in his 74th Epistle, he expressed his profound sadness that gymnasia had been closed in his homeland and that young men now preferred a soft life and diversions. It is also worth mentioning that the subjects that young men should be taught should definitely include history, physics, geometry, arithmetic and astronomy, which he dissociates from astrology. Indeed, in his Epistle 135 (to the Presbyter Diodoros) he stresses that a text book should be pleasant and, at the same time “simple and straightforward”.

As was the case with the other two hierarchs, Basil the Great emphasized to parents their obligation to bring up their children properly. He calls upon parents to nurture their children in accordance with the words of Saint Paul “with all humility and gentleness”, ‘never giving them any excuse for anger or sadness’. And, of course, they were to teach by example and not forget that they were to be the first to give their children religious instruction and to plant love and reverence for God in their responsive souls.

If we were to summarize the precepts of the three great hierarchs, we might say that they advise young people of any era: “Go on, ever forwards and ever upwards. Really want to be educated. Throw yourselves into your studies. Hunger to do something great and heroic. Learn to ignore yourselves and submit to the service of others. Do you dream of a better society? Work for it. Arm yourselves with vitality and persistence and live the love of Christ powerfully and ardently, until the end”.

by Metropolitan Nektarios of Hong Kong and South East Asia

PrevPreviousFriendship in Late Antiquity: the Case of Gregory Nazianzen and Basil the Great
NextSaint Gregory of Nyssa: On PerfectionNext