Saint Nina the Equal to the Apostles and Enlightener of Georgia 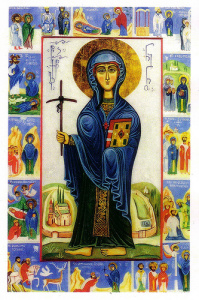 Nina was a relative of St. George the Great Martyr and Juvenal, the Patriarch of Jerusalem. Her parents belonged to the nobility in Cappadocia and since they both were tonsured in the monastic state, Nina was educated under the tutelage of Patriarch Juvenal. Hearing about the people of Georgia, the virgin Nina, from an early age, desired to go to Georgia and to baptize the Georgians. The All-Holy Mother of God appeared to Nina and promised to take her to this land. When our Lord opened the way, the young Nina, indeed, traveled to Georgia where, in a short period of time, she gained the love of the Georgian people. Nina succeeded in baptizing the Georgian Emperor Mirian, his wife Nana and their son Bakar, who, later on, zealously assisted in Nina’s missionary work. During her lifetime, Nina traveled throughout Georgia, mainly to convert the entire nation to the Faith of Christ, exactly at the time of the terrible persecution of the Christians at the hands of Emperor Diocletian. Having rested from her many labors, Nina died in the Lord in the year 335 A.D. Her body is entombed in the Cathedral Church in Mtzkheta. She worked many miracles during her life and after her death.

by Saint Nikolai Velimirovich, The Prologue from Ohrid

At that time also the Iberian nation, who live in the clime of Pontus, accepted the laws of God’s word and faith in the kingdom of heaven. This so excellent deed was brought about by a certain captive woman who had fallen among them, and who led a life of faith and complete sobriety and virtue, and day and night unceasingly offered up prayers to God. The very novelty of this thing began to amaze the barbarians, and they diligently inquired what it meant. She told them simply the truth of the matter, namely that she was wont thus to worship Christ her God. The strangeness of this name seemed to the barbarians the most astonishing feature of the whole business. As often happens, however, her very persistence aroused among the womenfolk a certain curiosity to see whether such devotion might not win some reward.

It is said to be a custom among them that if a child falls ill, it is carried round by its mother to each individual household, so that if anyone knows of some trustworthy remedy, he may administer it to the sufferer. Accordingly, when a certain woman had carried her ailing child to everyone, as the custom was, but without finding any cure in all the homes she had visited, she came at last to the captive woman so that she too might declare anything she knew of. The captive woman affirmed that she knew of no human remedy, but assured the mother that her God Christ, whom she worshipped, could grant the child that deliverance of which men had lost hope. Placing the infant on her hair cloak and furthermore offering up a prayer to the Lord, the captive woman then gave back the child cured to its mother.

The report of this spread to many, and the renown of the marvellous deed reached the ears of the queen who, being afflicted by some very grave bodily complaint, was in the greatest desperation. She asked for the captive woman to be brought to her. The latter, however, declined to go, lest she should seem to diverge from the retiring way of life fitting to her sex. Then the queen commanded them to carry her to the captive’s cell. After laying her likewise on her hair cloak and calling on Christ’s name, the captive woman raised her up immediately after the prayer in good health and spirits. She taught the queen that Christ, Son of God Almighty, was the Deity who had bestowed this cure on her, and that she should invoke Him, whom she ought to acknowledge as the source of her life and health. For it is He who distributes kingdoms to kings, and life to mortal men. And the queen, returning joyfully homewards, in answer to her husband’s enquiry revealed the source of her sudden restoration to health. But when in his joy at his wife’s recovery, he ordered presents to be sent to the woman, the queen said, “O King, the captive woman prizes none of these things. She rejects gold, despises silver and nourishes herself by fasting as if by food. The only way in which we can reward her is by worshipping that God Christ who cured me according to her prayer.”

At that time, the king paid no attention to this and put the matter off, although his wife often recalled it to his mind. At length one day while he was hunting in the forest with his retainers, the light of day was clouded over with dense murk and disappeared in the horror of pitch-black night, making it impossible to proceed. His companions dispersed in various directions and lost their way, and he remained alone enveloped in impenetrable gloom, without knowing what to do or where to turn. Suddenly his spirit, tormented by despair of being rescued, was lit up by a thought: “If indeed that Christ whom the captive had preached to his wife was God, then let Him now deliver him from this darkness, that he too might forsake all other gods to worship Him.” And forthwith, as soon as he had made this vow in thought alone, and before he had time to express it in words, the light of day was restored to the world, and led the king unharmed to the city.

Revealing immediately to the queen what had occurred, he summoned the captive woman, bidding her instruct him in the ritual of worship, and affirming that he would from now on venerate no other god but Christ. The captive woman appeared, and preached Christ the Lord, expounding the rites of prayer and the form of worship, in so far as these could properly he known to a woman. In addition, she told them to build a church, and described its shape.

The king accordingly summoned together all the folk of his nation, and related the events which had happened to him and the queen from the very beginning. He instructed them in the faith and, albeit himself not yet initiated into the Mysteries, became the apostle of his own nation. The men believed thanks to the king, the women thanks to the queen, and with a single mind they set to work to build a church. The surrounding walls were quickly erected, and the time came to set up the columns. When the first and second pillars had been raised, and they proceeded to lift the third, they employed all forms of machinery and the strength of oxen and men, but when it had been elevated to a slanting angle, it proved impossible by any manner of effort to raise it the rest of the way. The redoubled and often repeated efforts of all the men failed to move it from its position, and everyone was reduced to exhaustion. The whole people was seized with astonishment, and the king’s resolution began to fail him. Nobody knew what was to be done.

But when at nightfall everyone went away, and both the toilers and their toil fell into repose, the captive woman remained alone on the spot and passed the whole night in prayer. And behold, when the king and all his people arrived full of anxiety in the morning, he saw the column, which so many machines and so many men could not shift, standing upright and freely suspended above its pedestal – not set upon a ditch but hanging in the air about a foot above. As soon as the whole people witnessed this, they glorified God and began to declare this to he a proof of the truth of the king’s faith and the religion of the captive woman. And behold, while they were all paralyzed with amazement, the pillar slowly descended on to its base before their eyes without anyone touching it, and settled in perfect balance. After this the rest of the columns were erected with such ease that the remainder were all set in place that same day.

After the church had been built with due magnificence, the people were zealously yearning for God’s faith. So an embassy was sent on behalf of the entire nation to the Emperor Constantine, in accordance with the captive woman’s advice. The foregoing events were related to him, and a petition submitted, requesting that priests be sent to complete the work which God had begun. Sending them on their way amidst rejoicing and ceremony, the Emperor was far more glad at this news than if he had annexed to the Roman Empire peoples and realms unknown.

These happenings were related to us by Bacurius, a most trustworthy man, himself king of that very nation, and commander of the guards in our court (who was most scrupulous about religion and truth), at the time when he resided with us at Jerusalem on cordial terms, being then in command of the frontiers of Palestine.