The Holy Ten Martyrs of Crete 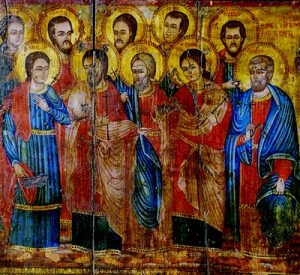 Saints Theodulus, Saturninus, Euporus, Gelasius, Eunician, Zoticus, Pompius, Agathopus, Basilides and Evaristus suffered for Christ during the third century under the emperor Decius (249-251). The prefect of Crete, also named Decius, fiercely persecuted the Church, and arrested anyone who believed in Christ. Once, ten Christians were brought before him from various cities of Crete, who at the trial steadfastly confessed their faith in Christ and refused to worship idols.

For thirty days they were subjected to cruel tortures, and with the help of God they all persevered, glorifying God. Before their death they prayed that the Lord would enlighten their torturers with the light of the true Faith. Since pain did not influence them, the saints were beheaded.

St Paul of Constantinople (November 6) visited Crete about a hundred years later. He took the relics of the holy martyrs to Constantinople to serve as a protection for the city, and a source of blessings for the faithful.

In the south-west end of the village Holy Ten, in the location known as Alonia (the threshing floor), the residents of the village created a small lake which was fed by the nearby river “Litheos tis Keras”. At this lake the villagers watered their animals. Because the waters of the lake were standing, most of the time they looked dark. As the time passed, the villagers noticed that the waters had therapeutic qualities. The story of the young shepherd in 1898 and the miracle which is associated with him confirm the above belief.

A young shepherd who used to take his flock to graze in the area where the ten martyrs were, at one time, got very sick. He was so sick and had such a high fever that he was unable even to walk. He had no one to help him and so he started praying to the Holy Ten to help him. And behold, the miracle happened. The Holy Ten appeared to him and advised him to go to the lake and drink from its water and he would be healed. The young shepherd obeyed the order of the Saints, went to the lake, drank from its water and his fever disappeared immediately. Very happy for his healing he went to the village and announced to the villagers his miraculous healing. Since that time the lake became a healing place. Many Cretans from all over Crete, as well as people from other areas went there and after they bathed in the lake they were healed. The elders of the village mentioned all the miracles that were associated with the lake to the Spiritual Father of the Monastery of Koudoumas. He, in turn, informed the local Bishop, Vassilios Markakis, who decided to go to the location in 1902 and after he studied the area he decided to dry the Holy Lake with the firm belief that under the lake there must have been a Holy Place. The intuition of the Bishop proved true. At the bottom of the lake the tombs of the Holy Ten were discovered. Immediately Bishop Vassilios built on the spot a small Byzantine Church dedicated to the memory of the Holy Ten. Since then that holy and blessed place is known as the ” Holy Lake”.

Apolytikion in the Third Tone
Let us now honour Crete, that land most marvellous, which sprouted forth the ten flowers revered by all, those goodly pearls of Christ our God, those verdant boughs of the Martyrs; for although they were but ten, the most blessed men put to shame the ten thousand armoured host of the wicked demonic ranks. And hence, they have received crowns of glory as stout-hearted Martyrs of Christ Saviour.

Kontakion in the Fourth Tone
Shining like a morning star, the Martyrs’ contest, worthy of all reverence, hath shown beforehand unto us Him that was born in a lowly cave, and Whom the Virgin conceived without seed of man.

Megalynarion
Let all the faithful honor with hymns and praise Crete’s Ten Martyrs of Christ, who valiantly endured the tortures of the tyrants and shed their blood at the hands of the lawless.

PrevPrevious“Roads to Damascus”: Crisis, Conversion, and Community in the Lives of the Three Hierarchs
NextBritish Airways Check-In Clerk finally wins her court battle over right to wear a crossNext