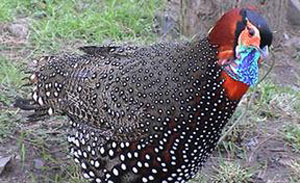 A group of rare and endangered birds is being taken from the Highlands to India in an attempt to kick-start a recovery programme for the species.

The nine tragopans are members of the pheasant family which normally inhabit the foothills of the Himalayas.

They have been bred in captivity by experts in the UK and donated to the conservation project.

The Highland Wildlife Park in Kingussie has provided special quarantine facilities to hold the game birds.

The Indian government and its wildlife authorities have made efforts to ensure that some of the country’s most endangered species do not slip further towards extinction.

They have made specific plans for more than seventy different species, two of which are the Satyr tragopan and the Temminck’s tragopan.

But wild birds are difficult to capture and breed so UK enthusiasts who have been successful have offered nine of the birds from captive-bred collections here to be sent to India.

They have been collected and quarantined at the Highland Wildlife Park ahead of their journey which is due to begin on Wednesday.

Douglas Richardson, animal collection manager at the park, said: “The specialist skills and resources developed at wildlife parks and zoos to manage captive species are increasingly the solutions of choice when trying to address species conservation in the field.

“It is very far-sighted of the Indian authorities, working in conjunction with the World Pheasant Association (WPA), to establish genetically healthy captive populations for key species now so that they are available for potential reintroduction in the future.”

He added: “The role of the Royal Zoological Society of Scotland’s Highland Wildlife Park in this case is to act as the pre-export quarantine facility for the two species of tragopan pheasants that are the focus of this latest project.

“India is rightly concerned to ensure that the birds they receive are healthy and that they do not present any new disease risks to any resident species, and our purpose-built bird quarantine unit allows for this understandably precautionary approach.”

The long-term plan is for the tragopans to live in special aviaries in several Indian zoos in the Himalayas.

The aim is for zoo staff to gain practical experience in breeding tragopans using the birds from the UK.

When this has been achieved, eggs from wild nests in India will be put under the British tragopans, which will act as surrogate parents.

In the wild, tragopans do not normally breed until they are three years old.