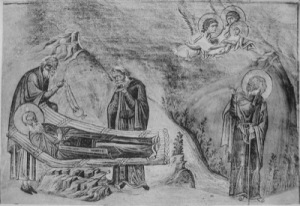 Ammon was a great ascetic of the fifth century. He was the abbot of the Tabennesiote Monastery in Upper Egypt. He was one of the most venerated ascetics of the Nitrian Desert, and Saint Athanasius mentions him in his life of Saint Anthony.Ammon (or Amon), St., the founder of the celebrated settlement of coenobites and hermits on and near Mons Nitria (Ruf. de Mon. 30); he is often styled the “father of Egyptian monasticism.” He was contemporary with St. Anthony, and filled the same place in Lower Egypt as Anthony in the Thebaid. Being left an orphan by his parents, wealthy people near Alexandria, he was forced by his uncle to marry. But on the wedding day he persuaded his bride to take a vow of celibacy, and for eighteen years they lived together as brother and sister: afterwards with her consent he withdrew to Nitria, and from that time only visited his wife twice a year (Pall. Hist. Laus. 8). A great multitude of zealous disciples soon gathered round him; so that Palladius not many years later found about five thousand monks, some living quite alone, some with one or more companions; while six hundred “advanced in holiness” (τελείοι) dwelt apart from the rest in more complete isolation (ib.). Several miracles are related of Ammon (Socr. Hist. iv. 23; Soz. Hist. i. 14; Niceph. Hist. viii. 41).Feast Day: January 2

From the sayings of the Holy Fathers:

On one occasion Abba Ammon went to Abba Anthony, and he lost the way, and sat down for a little and fell asleep; and he rose up from his slumber, and prayed unto God, and said, “I beseech Thee, O Lord God, not to destroy that which “Thou hast fashioned.” Then he lifted up his eyes, and behold, there was the form of a man’s hand above him in the heavens, and it showed him the way until he came and stood above the cave of Abba Anthony.

Abba Anthony prophesiazed unto him, saying, “Thou shall increase in the fear of God.” Then he took him outside the cave, and showing him a stone, said, “curse this stone, and smite it” and he did so, and Abba Anthony said unto him, “It is thus that thou shall arrive at this state, for thou shall bear heaviness, and great abuse”; and this actually happened to Abba Ammon.

A young monk, going down from the skete to the city, passed by the but of Abba Ammoun and confessed to him: “My elder, Abba, is sending me to the city on an errand. I, however, who am a man of weakness, fear temptation.”

“Be obedient,” the holy man advised him, “and if temptation should arise before you, say these words: ‘O God of powers, through the intercession of my spiritual Father, deliver me.’”

The brother took courage from the words of the Abba and went immediately about his duty. The devil, however, who had been biding his time to bring harm to the monk, sent a woman of evil ways hastily to entrap him in her evil den. In his despair, the monk suddenly remembered the advice of Abba Ammoun and shouted with faith: “O God of powers, through the intercession of my spiritual Father, deliver me.”

He then found himself, without knowing how, on the road that led to the desert.