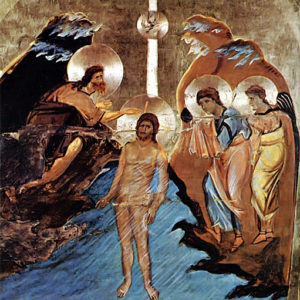 Having beheld the fire of the Godhead

Bodily coming down and entering upon him….

Seeing the Invisible one visible,

The Master in the form of a servant…

The Great feast of the Epiphany (or Theophany or of Lights), for the Western Christians on the one hand, is related to the Worship of the Magi, whereas for our pious East, to the Baptism of Christ in the River Jordan. In this “mysterious” river Theophany was performed. The Son came to be baptized in its waters by Christ’s relative, John. The Father appeared through the heavenly voice proclaiming Him as His beloved Son. The Holy Spirit, in the form of a dove, certified the truth of the matter. “The revelation of the Trinity occurred in the Jordan. For this was supra-godly nature. The Father shouted. This one who is baptized, my beloved Son. The Spirit was also there likewise with its likeness. Whom peoples bless and greatly magnify unto all the ages”. In the Jordan, “the true Light, appeared and gives enlightenment to everyone”. In the Jordan as Christ was baptized, “we have seen the true Light, we have received the heavenly Spirit, we have found true Faith, worshipping the undivided Trinity”.

The Byzantine icon of the baptism is the icon of the Holy Trinity. The Son in the streams of the river. The Spirit of Truth, in the form of a dove, is above the divine head of the Word. And above, the presence of the Father is made sensorial with a band of lines, a linear depiction of the divine voice: “This is my beloved Son…” At the lower part the river, with greatly pouring, much flowing, a visible symbol of the wealth of the given saving grace and gift.

On January 6 “the streams of the Jordan are changed into healings by the presence of the Lord” and “the transgressions of people by the waters of the Jordan are wiped out”. The river took them away literally. The Jordan of grace “washes all the mist of sin which is hard to restrain”, with the dew of the Holy Spirit.

Jordan has a curious prehistory in the Old Testament. Its passage was tantamount to the passage to the Land of Promise, which Land of Promise was a pre-igmage of the Kingdom of God. Joshua of Nun led the old Israel, through the Jordan, to the land where milk and honey flowed. Jesus means Savior. That ancient Joshua of Nun saved the old chosen people leading them through the Jordan to the greatly promised Canaan. As soon as the priests who were carrying the Ark of the Covenant placed their foot on the waters of the Jordan, as soon as they wet their calves in the Jordan streams “Jordan turned backwards”. The one part turned back towards its springs and the other rushed to run towards the delta resulting in the hollow emptying and the people passing over to the place which Yahweh gave (Josh. 3:11-13). After the passage of the people matters found their regular rhythms: “the water of the Jordan rushed against the land and as yesterday and the third day through all the crevices” (Josh. 4:18).

Jordan turned back, when Elias, a little before his ascension, struck it with his cloak (a sheepskin which he was wearing as an outer garment). It gathered back its waters to the right and left, the hollow dried and the great Prophet passed with his disciple Elisha. And again, after Elias’ ascension, when Elisha struck it with the cloak of his Elder and Teacher, so that he could be assured that he received from God double the grace of Elias.

Now the new [Joshua] Jesus, the Son of God and simultaneously Son of Man, the par excellence and in absolute meaning Savior comes to the Jordan to pass over in his own person, the new Israel of Grace to the new Land of Promise, the Church, the Kingdom, where we are no longer speaking of milk and honey, but of the Bread of Life who has descended from heaven, He who is “truly food”, and of the Wine, who is not wine, but the Blood of the New Covenant and the transfusion of Eternal Life. Thus the Jordan, which does not feel on its spine today the Arks and Slabs and Jugs of Manna and Rods of Aaron, foreshadowing, in other words, and hints and prophetic signs, but the fire itself of Godhead physically descending and entering upon it, and again it turned back from its excessive awe and sacred dread, from shock from the Mystery.

The Lord of Prophets, the source of prophecy of Elias and Elisha, came to the Jordan and reveals the Grace of deliverance through baptism. Elias, who also was fed by a crow, was a harsh censurer of sin and kept the heavens closed for three and half years from rain, until the crooked and hard-necked there people of murmuring and denial would be humbled from hunger and thirst and return to the God of their fathers. Elisha could not stand the mockeries which the unruly kids of this “vagabond” people were shouting behind him: “ascend, o bald one, ascend!” He cursed them and two bears hastened from the nearby forest to avenge the Prophet’s pain of soul, tearing to shreds right there, forty two lads (4 Kings 2:23-24). Christ, absolutely good both Chrestos with e, as also Christos with i, the Lord of goodness and of forgiveness, in the Jordan quenches His people black with thirst, with unending streams of forgiveness, grace and everlasting life: “With the living stream You quench, o my Jesus, in the river Jordan compassion, us who are burned up by thirst of You, o Philanthropic one. Whence quenched from Your immortal and life–bearing spring, o Christ, we chant: Blessed is he who appeared our God, glory to Thee”. Jordan in olden times respected Elias. Now that it is receiving the Sun of Righteousness, would it be possible to not again turn back? Jordan which obeyed an Elisha who got frustrated being mocked, turned back again, feeling in its waters fully alive the cool spring of forgiveness.

The water always was an archetype of healing and cleansing of body, but also of moral-spiritual cleansing. “Wash yourselves and become clean” urges Yahweh through the mouth of Isaiah (1:16). Neëman, a nobleman of the king of the Assyrians, when he became ill with leprosy, sought out Elisha. On him he leaned his hopes for a cure. And he sent him to the Jordan, to wash seven times to be healed. Neëman was scandalized. He was expecting another type of miracle from the Prophet – Did the rivers in my homeland vanish? Is Avanas and Farfas evil, for me to have washed in their waters and to be cleansed. Was it necessary for me to make such a trip, to undergo so many toils to come to the Jordan? “And he turned back and departed in anger”. When his servants brought him to his senses and convinced him to obey the Prophet, “Neëman descended and immersed himself in the Jordan seven times, according to the word of the man of God. And his flesh returned to him as of a young child and he was cleansed” (4 Kings 5:9-14). An image and foreshadowing of today’s wondrous events. Because, truly “today the streams of the Jordan are altered unto healing, by the presence of the Lord”. From today, not seven, but only three times, in the form of the Trinity, is it necessary for us to be washed in the water of the sanctifying bath of rebirth, for the leprosy of sin to leave from over us and the gore of passions of reproach and dishonor. To become clean, whitened by the Trinitarian God, like the kid and like snow according to His command, through Isaiah. From today the waters of the Jordan and of our baptismal font are not and no longer are called waters, but streams, like the Nama [in Greek means Stream and is a term used for Communion Wine] the holy Chalice of Life. “Streams [namata] of Jordan you surrounded yourself with O Savior,…to return people from deception and save our souls”. From today, he who believes and is baptized, becomes Moses, because Christ can also say for him:

Jordan separates Israel (you can read also Palestine) from Jordan, from the children here claiming the fatherhood of Abraham, from the ones there. But simultaneously Jordan unites in one flock the genuine children of Abraham, under one Shepherd, the Good One, Him who today was witnessed by the paternal voice as beloved Son, in Whom the Father was well pleased. Jordan, running from the Mountains of Lebanon down to the Dead Sea, turns its face and turns back disgusted by the multitude of unjustly spilt blood in its area, which, together with that righteous Abel, cries out together to the Lord. Jordan will turn back from the excess of joy, and will leap for joy as a deer and the wilderness of the Jordan will rejoice the holy and longed for day when in the Holy Land holy reasoning, holy righteousness and the holy peace of the God who Appeared will prevail.

By His Eminence Metropolitan Joseph of Prekonessos

PrevPreviousSaint Seraphim of Sarov, the Righteous Wonderworker
NextJohn the ForerunnerNext