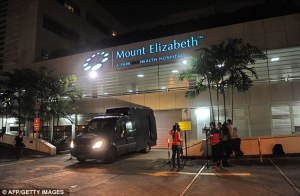 Indian authorities added murder charges Saturday for suspects in the brutal gang rape that led to the death of a 23-year-old woman and sent outraged protesters to the streets.

Six people, including a minor and a bus driver, have been arrested in connection with the rape, which occurred in New Delhi this month.

Throngs of protesters have taken to the streets for days, demanding more protection for women and punishment for those behind the assault.

Fearing massive protests following the death, police tightened security in the capital city of New Delhi and barricaded some sites of previous rallies.

Authorities said demonstrations are only allowed at Jantar Mantar observatory and the Ram Lila grounds, which were the scenes of previous rallies.

The woman was airlifted to Singapore this week after she was treated for injuries in a New Delhi hospital.

Singapore doctors said she died “peacefully” early Saturday surrounded by her family and Indian Embassy officials. A medical team in Singapore is conducting an autopsy.

The woman had been in “extremely critical condition” since her arrival at the Singapore hospital Thursday, and took a turn for the worse, said Dr. Kelvin Loh, chief executive officer at Mount Elizabeth Hospital.

“She had suffered from severe organ failure following serious injuries to her body and brain,” Loh said. “She was courageous in fighting for her life for so long against the odds, but the trauma to her body was too severe for her to overcome.”

Authorities have not released the name of the woman, but Indian protesters are calling her Damini, which means “lightning” in Hindi.

“Damini” is also a 1993 Bollywood film whose lead female character fights for a housemaid, a victim of sexual assault.

India’s ambassador to Singapore said her relatives, who are Hindus and live in New Delhi, have asked for privacy.

Attackers assaulted the woman and her male companion on a bus on December 16, robbing them of their belongings before dumping them at the side of a road, police said.

The male companion was eventually discharged from a hospital.

Last week, police said the woman recovered enough to give a statement to a magistrate from her hospital bed. But on Sunday, she underwent another surgery to wash out infection in her abdomen, her doctors said.

The death spurred an outpouring of sadness and calls for action to ensure change and punishment of her rapists.

Reported rape cases in India — where a cultural stigma keeps many victims from reporting the crime — have increased drastically over the past four decades — from 2,487 in 1971 to 24,206 in 2011, according to official figures.

One such recent case involved a girl, 17, who said she was gang-raped during the Hindu festival of Diwali on November 13. A formal case wasn’t registered by police until 14 days later.

The girl committed suicide Wednesday by ingesting poison, according to authorities in the Patiala district of Punjab, in northern India.

In her suicide note, she blamed her alleged rapists. Three suspects — including a female accomplice — have been arrested.

Most women in India have stories of sexual harassment and abuse on public transportation, on the streets and elsewhere, said Seema Sirohi of the Indian Council on Global Relations.

“There are a lot of reasons why this happens, but the patriarchal system is one, a lack of policing is another and general treatment of women is not equal to men, even though it may be so under the law,” Sirohi said.

The Indian government announced plans Thursday to “name and shame” convicted rapists by posting their names, images and addresses on official websites, according to the Times of India.

And the Cabinet plans to set up a commission to look into rape cases and suggest measures to improve women’s safety. This group has three months to submit its report to the government.