Holy Theophany: The Baptism Of Jesus And The Blessing Of The Waters 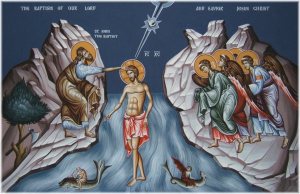 Today, January 6, Orthodox Christians celebrate another of the Twelve Great Feasts of the Christian Church — the Theophany, or, as it is also called, the Epiphany. It is the day that Jesus is baptized in the River Jordan by the holy prophet and “forerunner” John, the day that Jesus of Nazareth, stepson of the aging carpenter Joseph, is revealed also to be the Christ, the Son of the eternal God.

That’s pretty big talk, admittedly. Still, it is a vision that we are pleased to affirm, and (here’s one additional mystery) it is something that by thus affirming we gradually come to behold. As with many beauties, this is apprehended only by those who are willing to see.

Early on, both the Nativity of Christ and the Theophany were celebrated on this same day, Jan. 6, but in the 4th Century the feasts were separated and the Christmas celebration was moved to December 25th, a day on which the pagans — as Metropolitan Hierotheos has written — “celebrated the sun god, and the Christians the Sun of Righteousness,” the Light of the world.

Historically, the Forerunner John — that famous wild man who lived on nuts and wild honey, and dressed in camel hair — was in the habit of calling errant Jews to repentance, and a good many of them were pleased to receive his words. He also baptized them, as a performance of the new birth and new life to which they were committing themselves. While he was going about it, this same John was also in the habit of quoting Scripture, in particular the following passage from the Prophet Isaiah:

The voice of one crying in the wilderness: ‘Prepare the way of the Lord; make His paths straight. Every valley shall be filled and every mountain and hill brought low; the crooked places shall be made straight and the rough ways smooth; and all flesh shall see the salvation of God.’

Then Jesus came from Galilee to John at the Jordan to be baptized by him. And John tried to prevent Him, saying, ‘I need to be baptized by You, and You are coming to me?’ But Jesus answered and said to him, ‘Permit it to be so now, for thus it is fitting for us to fulfill all righteousness.’ Then John allowed Him.

This is when the story becomes very, very good. And, in case you had wondered, this is where our larger story also bears, for Orthodox Christians, both the revelation of Jesus as the Christ and the implication of the mystery at the center of our specifically Trinitarian Faith, alluding as it does to One God in Three Persons.

When He had been baptized, Jesus came up immediately from the water; and behold, the heavens were opened to Him, and He saw the Spirit of God descending like a dove and alighting on Him. And suddenly a voice came from heaven, saying ‘This is My beloved Son, in Whom I am well pleased.’

The troparion sung during our celebration of the feast indicates how we have come to appreciate this curious phenomenon:

When You, O Lord were baptized in the Jordan
The worship of the Trinity was made manifest,
For the voice of the Father bore witness to You
And called You His beloved Son,
While the Spirit, in the form of a dove,
Confirmed the truthfulness of His word.
O Christ, our God, You have revealed Yourself
And have enlightened the world, glory to You!

Perhaps of increased importance, as well — and surely of some interest even to those who do not share our faith — this is the Great Feast when our minds are most directed to the sanctification of the earth itself, and to the healing, the recovery of the stuff of our creation. This is when we celebrate what we call “The Great Blessing of the Waters.”

Following further prophetic readings from Isaiah and the accounts of the Gospels, our priest plunges the holy cross into a basin of water, three times, each time entreating the Lord — who blessed the waters of the Jordan by entering into it — to hear our prayer:

Incline your ear and hear us, Lord, who accepted to be baptized in Jordan and to sanctify the waters, and bless us all, who signify our calling as servants by the bending of our necks. And count us worthy to be filled with your sanctification through the partaking and sprinkling of this water. And let it be for us, Lord, for healing of soul and body.

For you are the sanctification of our souls and bodies, and to you we give glory, thanksgiving and worship, with your Father who is without beginning, and your All-holy, good and life-giving Spirit, now and forever, and to the ages of ages.

We repeat, at this time, the troparion above, and follow that hymn with this brief, but rich kontakion.

Today You have shown forth to the world, O Lord, and the light of Your countenance has been marked on us. Knowing You, we sing Your praises. You have come and revealed Yourself, O unapproachable Light.

I am often asked what it is that distinguishes early Eastern Christianity — that is, Orthodoxy — from most other expressions of the Christian Faith. My sense of that distinction is simple but profound: the Orthodox Church is all about healing, it is about the recovery of that divinity — His very countenance — that has been marked on us. Orthodoxy teaches us that this healing begins with the soul, extends to the body, and extends to all creation. We are not about spiritual transcendence of the material world, but about re-infusing that world with His Life-giving Spirit. This recovery is what is figured — is physically performed — by the particular baptism we celebrate today.

A blessed Theophany to all!