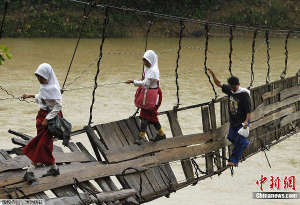 This dramatic photograph shows students hanging on to the side steel bars of a collapsed bridge as they cross the Ciberang River to get to school in the Indonesian village of Sanghiang Tanjung.

Flooding had caused a pillar supporting the suspension bridge to break and the alternative route would take the children an extra 30 minutes, so they decided to cross as they usually would have done when the bridge was intact.

This picture was one that was extensively featured on social media and caused much debate.

On a Wednesday morning I received an image on my twitter feed, it was a photo from a local newspaper that showed a student crossing a river on a collapsed bridge. The picture caught me, I needed to find out where it was so I could go there to capture it.

When I had finished shooting some business pictures in Jakarta’s financial district I realised that I had something different to shoot for the next day. I searched online to find the location of the collapsed bridge but I couldn’t find the exact location. There was a blank map with only the name of the village, Sanghiang Tanjung. Surprisingly, it said the village was just 80m (130 km) from our Jakarta office – a travel time of about two hours. My estimation was it would take four.

The first time I held a camera I was 14 years old and I got three clicks during photography class. I remember that moment.

When I started out, I was freelancer and a new magazine asked me to cover a funeral ceremony on a Bali resort island. I knew I wouldn’t get paid much, but I took the opportunity and paid half the budget from my own pocket. After the story was done and printed in the magazine, I knew this was the kind of job that I wanted.

Covering the Asian tsunami in 2004 left the biggest mark on me. It was the biggest disaster I had ever covered, and the mass destruction in Banda Aceh made me sick to my soul. I worked jointly with humanitarian aid organisations to help people and to minimise my feelings of guilt.

When I was shot in the leg during the East Timor conflict in 1999, I realised safety is more important than pictures.

The people I admire the most are the ones who live in conflict zones and disaster areas. Even though they have limited facilities, they survived. They are strong human beings.

At 3am on Thursday morning my friend and driver Soewarno and I headed to the village. We reached our destination by 6am but we had to find the right direction that the students would take so that I could take pictures from the front, not from the back. We found many roads in to the village but no one knew where the bridge was.

With the help of my friends, we were able to get the name of the head of the village, Epi Sopian, who accompanied us to the location. Edi said the bridge collapsed during Saturday’s big flood when wood and bamboo hit the suspension bridge’s pillar.

I arrived at the location as the students were crossing. They were already in the middle of the bridge. Oh no, these could not be the children who wanted to go to school, I thought. It was more like an acrobatic show, with the collapsed bridge as an apparatus and without any safety device at all.

They walked slowly, sometimes screaming as their shoes slipped. Suddenly the rain came. A last group of students, Sofiah and her friends, were on the bridge. Happily, all the students crossed safely. I took pictures for no more than five minutes.

As Sofiah sheltered from the rain, I asked her: “Sofiah, is there no other way so you must pass through this collapsed bridge?” “There is, but we would have to walk around and that is 30 minutes more than this route. If we pass the collapsed bridge we need only 10 minutes to walk this way,” she said. “You’re not afraid?” I asked. “I was afraid,” she replied very slowly. “But I have to go to school.”

When the rain stopped, I followed Sofiah as she walked to school. It wasn’t far, only a 10 minute walk. While following behind her, I thought, if Sofiah was my daughter (I have a daughter the same age) I would keep her at home until the government builds a new bridge. Perhaps her grades would not go up, but it’s better than crashing and being dragged into the river.

It was difficult to think that a day after taking pictures of middle class workers in the Indonesian capital, just three hours away from luxurious buildings, I found a group of students risking their lives to go to school.

Three months later a new bridge has been built and Beawiharta photographed students on their way to school in November of this year.