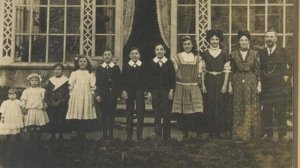 Curators at the National Museum of London have discovered what they believe to be the first ever recordings of a family Christmas.

They were made 110 years ago by the Wall family who lived in New Southgate in North London.

There are 24 clear recordings on wax cylinders which were made using a phonograph machine between 1902 and 1917.

Music curators say the sound quality of the music recorded is outstanding.

Cromwell and Mini Wall had nine children, eight of whom appear on the recordings. All the recordings are bursting with vibrancy and life, according to Julia Hoffbrand who is the curator at the Museum of London who helped restore the recordings.

“When I first heard the recordings the hairs on my arms stood on end,” she said. “It was fantastic. We had an idea of what was on the recordings because Cromwell had written very full descriptions on the cylinder boxes but it was really like a window opening into the past. It was like being in the same room as the family and their friends”.

Many of the recordings were made at family gatherings over Christmas and New Year.

Cromwell Wall, who made the recordings, wheeled the phonograph along the streets in his children’s pram in order to record the sound of Old Southgate Church bells peeling out New Year

Some of the later recordings were made during WWI when three of the sons, who feature in earlier recordings were away at war. One son, Oliver, died of pneumonia in a French hospital three weeks before peace was declared.

The recordings were restored this summer and many of the relatives heard them for the first time in October. It brought back some great memories for Oliver Wall, one of Cromwell’s grandchildren.

“It was a wonderful atmosphere. I remember the occasions always at Christmas and we always had big parties and singing round the piano with grandpa playing and he used to take us marching upstairs and all over the big house they had”.

His cousin? Daphne reminisces how he He used to dress up as Father Christmas.

“There was a great deal of excitement,” she said. “It was fun!”

It is very unusual for recordings on wax phonograph cylinders to survive for so long. Phonographs were introduced for use in offices as dictating machines and so it is extremely rare for them to be used to record domestic sounds and occasions.

“We were thrilled,” says Julia Hoffbrand. Phonographs and cylinders were expensive so you had to have a certain level of income to record and a level of skill and care to make recordings and to take care of the cylinders”.

The cylinders themselves are similar to old fashioned vinyl records in that the phonograph would make indentations into the cylinder which could then be replayed. Bill Larry, digital collections manager at the Museum was among those who helped restore the cylinders.

“We tried to reduce any noise by cleaning the cylinder first with a fine brush that can get in between the groove and once we had the best playback from the cylinder we then digitally cleaned them up”.