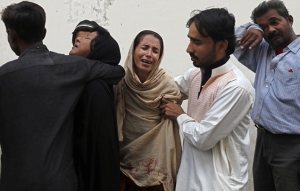 The UN has scaled back an anti-polio campaign in Pakistan after two more health workers died in the latest of a spate of gun attacks.

Attacks in the Peshawar region killed a vaccination supervisor and her driver, and injured a student volunteer.

No group has claimed responsibility, but the Taliban have issued threats against the UN’s anti-polio campaign.

Coming after five deaths on Tuesday the UN said it was pulling staff involved in the campaign from the streets.

The UN provides technical and financial support to employees and volunteers of the local health department who administer the polio drops.

Despite the killings, Pakistani officials insisted the immunisation drive was continuing in some areas, even though a number of Pakistani health workers were refusing to go out, Reuters news agency reported.

Pakistan is one of just three countries where the disease is still endemic.

The vaccination supervisor and her driver died when their car was sprayed by gunmen riding motorbikes in Charsadda district, north-east of Peshawar, police said.

The student volunteer was shot in the head and critically injured when gunmen on two motorbikes fired at a team of vaccinators in a northern suburb of Peshawar.

Gunmen riding motorbikes also shot at polio vaccinators in another area of Charsadda and in the adjoining district of Nowshera, although no injuries were reported.

The programme was halted in Sindh province on Tuesday after four female health workers were shot dead in the city, while another female worker was killed in an attack in Peshawar.

Prime Minister Raja Pervez Ashraf on Tuesday condemned the attacks and praised the work of the polio vaccination teams, calling on regional authorities to guarantee their safety.

Wednesday is the final day of a three-day nationwide anti-polio drive – during which an estimated 5.2 million polio drops were to be administered.

There has been opposition to such immunisation drives in parts of Pakistan, particularly after a fake CIA hepatitis vaccination campaign helped to locate Osama Bin Laden in 2011.

Militants have kidnapped and killed foreign NGO workers in the past in an attempt to halt the immunisation drives, which they say are part of efforts to spy on them.

Afghanistan and Nigeria are the only other countries where polio is still endemic.

Pakistan is considered the key battleground in the global fight against the disease, which attacks the nervous system and can cause permanent paralysis within hours of infection.

Almost 200 children were paralysed in the country in 2011 – the worst figures in 15 years.

Earlier this year, the Global Polio Eradication Initiative warned that tackling the disease had entered “emergency mode” after “explosive” outbreaks in countries previously free of polio.

The World Health Organization (WHO) said polio was at a tipping point, with experts fearing it could “come back with a vengeance” after large outbreaks in Africa and Tajikistan and China’s first recorded cases for more than a decade.