The Entrance of the Theotokos into the Temple 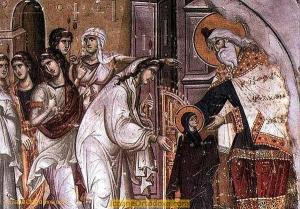 When the Most-holy Virgin Mary reached the age of three, her holy parents Joachim and Anna took her from Nazareth to Jerusalem to dedicate her to the service of God according to their earlier promise. It was a three-day journey from Nazareth to Jerusalem but, traveling to do a God-pleasing work, this journey was not difficult for them. Many kinsmen of Joachim and Anna gathered in Jerusalem to take part in this event, at which the invisible angels of God were also present. Leading the procession into the Temple were virgins with lighted tapers in their hands, then the Most-holy Virgin, led on one side by her father and on the other side by her mother. The virgin was clad in vesture of royal magnificence and adornments as was befitting the “King’s daughter, the Bride of God” (Psalm 45:13-15). Following them were many kinsmen and friends, all with lighted tapers. Fifteen steps led up to the Temple. Joachim and Anna lifted the Virgin onto the first step, then she ran quickly to the top herself, where she was met by the High Priest Zacharias, who was to be the father of St. John the Forerunner. Taking her by the hand, he led her not only into the Temple, but into the “Holy of Holies,” the holiest of holy places, into which no one but the high priest ever entered, and only once each year, at that. St. Theophylact of Ohrid says that Zacharias “was outside himself and possessed by God” when he led the Virgin into the holiest place in the Temple, beyond the second curtain-otherwise, his action could not be explained. Mary’s parents then offered sacrifice to God according to the Law, received the priest’s blessing and returned home. The Most-holy Virgin remained in the Temple and dwelt there for nine full years. While her parents were alive, they visited her often, especially Righteous Anna. When God called her parents from this world, the Most-holy Virgin was left an orphan and did not wish to leave the Temple until death or to enter into marriage. As that would have been against the Law and custom of Israel, she was given to St. Joseph, her kinsman in Nazareth, after reaching the age of twelve. Under the acceptable role of one betrothed, she could live in virginity and thus fulfill her desire and formally satisfy the Law, for it was then unknown in Israel for maidens to vow virginity to the end of their lives. The Most-holy Virgin Mary was the first of such life-vowed virgins, of the thousands and thousands of virgin men and women who would follow her in the Church of Christ.

by Saint Nikolai Velimirovich, The Prologue from Ohrid.

The Celebration of Christmas (3 of 6)