Consecration of Metropolitan Athenagoras of Kydonion (Cydoniae) at the Ecumenical Patriarchate 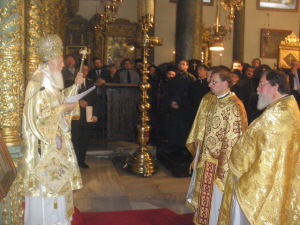 On Sunday, November 18, 2012, His All-Holiness the Ecumenical Patriarch presided at the Divine Liturgy with eight Hierarchs (from the Churches of Constantinople and Greece) concelebrating at the Patriarchal Church of St. George for the consecration of the newly-elected Metropolitan Athenagoras of Kydonion, who formerly served as Grand Archimandrite at the Ecumenical Patriarchate. His Beatitude Archbishop Ieronymos of Athens and All-Greece and many Hierarchs were also in attendance.

Statement by His All-Holiness at the Announcement of the Retirement of Benedict XVI, Pope of Rome

2014 Thronal Feast: Visit of Pope Francis to the Phanar