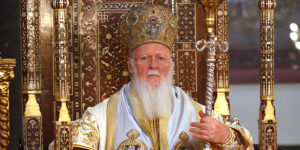 Your Eminence Archbishop Demetrios of America,

Your Eminence Metropolitan Augoustinos of Germany,

Your Eminence Metropolitan Emmanuel of France,

Beloved Co-celebrants in the Lord;

Your Excellencies and Honorable Representatives of Governments;

Distinguished Members of Academia and the Press;

Beloved Children in the Lord:

With paternal joy and patriarchal satisfaction, from the Sacred Center of our Faith, we are delighted to address the Second International Conference on Religious Freedom organized and hosted by our cherished Order of St. Andrew the Apostle, the Archons of the Ecumenical Patriarchate. It is not without special significance that this extraordinary and watershed conference is being held in Berlin in conjunction with our Patriarchal Liaison Office to the European Union and the Greek Orthodox Metropolis of Germany.

In the wake of the horrific tragedy of the Second World War, Berlin became the paramount symbol of a divided world, an image of a divided humanity. The Wall itself was a symbol of separation and isolation, of hostility and death. It separated families and friends, estranging them psychologically, socially, and spiritually. However, on November 9, 1989, the Wall was breached; the barrier was broken; the partition was torn down.

As you assemble religious leaders and scholars, renowned politicians and diplomats, journalists and activists, in order to discuss practical problems facing minorities in our region, this is precisely the focus of your attention, dear Archons. The subject of your conference is: “Tearing down Walls: Achieving Religious Equality in Turkey.” And as people of all faiths recognize only too well, the force that finally brought down and shattered the Berlin Wall – and, indeed, continues to bring down every wall of separation – could only be the infinite and loving grace of God. As Christians, we are clearly reminded of this fact by the Apostle Paul:

Now, then, through Christ Jesus, you who were once far away have drawn close in the blood of Christ. For He is our peace; He has united both those afar and those near, abolishing the middle wall of division, which is hostility. (Ephesians 2.13-15)

Ultimately, our struggle for religious freedom and our respect for the conscience of every human being are proof of the triumph of love over hatred, of unity over division, and of compassion over the numbing sensation of indifference that is rooted in contemporary materialism. True freedom of conscience is based on the conviction that our relationship with “the other” is not separate from but integrally related to our relationship with ourselves. After all, again in the words of St. Paul, “we are all members of one body.” (Romans 12.5)

For countries and cultures where there are dominant viewpoints, faith traditions, as well as political and economic instruments, the rights of the majority can only be truly and justly secured by guaranteeing the full human and religious rights of all minorities. This is why our Ecumenical Patriarchate tirelessly seeks to promote the rights of all peoples and faiths, both in Turkey and throughout the world. For the measure with which we treat and honor others is the measure with which we can also expect them to recognize and respect us.

This Second International Conference of the Order of Saint Andrew continues the crucial work inaugurated two years ago in Brussels. At that time, you carefully and critically examined the diverse opportunities for Turkey to build bridges through its engagement with the European Union. This year, you must further consider the various complexities of our compartmentalized societies, pursuing positive ways of deconstructing barriers to full participation of all people. There are certain walls that secure human dignity, and there are other walls that destroy that same human dignity. Some walls aim to protect, while other walls cast shadows of hostility, prejudice and isolation. Perceptive prudence and rational realism are required in order to know which walls to erect, and which to erase. Your conference undoubtedly plays a vital role in this process of discernment that seeks out the walls of negativity, hostility and suspicion, bringing them crashing down by building up mutual trust, respectful tolerance, and ultimately love.

Therefore, as you confront and explore the fundamental themes and challenges presented by this Second International Conference on Religious Freedom, we pray that wisdom and discernment will guide your deliberations and decisions. We greet you all in the name of the merciful Lord. May God bless all of you – organizers, speakers and participants.

Statement by His All-Holiness at the Announcement of the Retirement of Benedict XVI, Pope of Rome

September 1st: Patriarchal Encyclical for the Protection of Environment