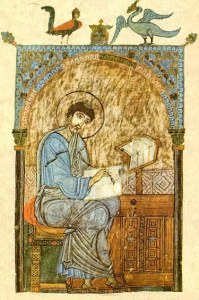 Saint Isidore of Pelusium lived during the fourth-fifth centuries. He was a native of Alexandria, and was raised among pious Christians. He was a relative of Theophilus, Archbishop of Alexandria, and of his successor, St Cyril (January 18). While still a youth he quit the world and withdrew to Egypt to Mount Pelusium, which became the site of his monastic efforts.

St Isidore’s spiritual wisdom and strict asceticism, combined with his broad learning and innate knowledge of the human soul, enabled him to win the respect and love of his fellow monks in a short time. They chose him as their head and had him ordained a priest (The earliest sources for his life, however, say nothing of him being an igumen).

Following the example of St John Chrysostom, whom he had managed to see and hear during a trip to Constantinople, St Isidore devoted himself primarily to Christian preaching, that “practical wisdom” which, in his own words, is both “the foundation of the edifice and the edifice itself”, while logic is “its embellishment, and contemplation its crown.”

He was a teacher and a willingly provided counsel for anyone who turned to him for spiritual encouragement, whether it was a simple man, a dignitary, a bishop, the Patriarch of Alexandria, or even the emperor. He left behind about 10,000 letters, of which 2,090 have survived. A large portion of these letters reveal profound theological thought and contain morally edifying interpretations of Holy Scripture. St Photius (February 6) calls Isidore a model of priestly and ascetical life, and also a master of style.

St Isidore’s love for St John Chrysostom resulted in his support of St John when he was persecuted by the empress Eudoxia and Archbishop Theophilus. After the death of St John, St Isidore persuaded Theophilus’ successor St Cyril to inscribe the name of St John Chrysostom into the Church diptychs as a confessor. Through the initiative of St Isidore the Third Ecumenical Council was convened at Ephesus (431), at which the false teaching of Nestorius concerning the person of Jesus Christ was condemned.

St Isidore lived into old age and died around the year 436. The Church historian Evagrius (sixth century) writes of St Isidore, “his life seemed to everyone the life of an angel upon the earth.” Another historian, Nicephorus Callistus (ninth century), praises St Isidore thus, “He was a vital and inspired pillar of monastic rules and divine vision, and as such he presented a very lofty image of most fervent example and spiritual teaching.”

The Writings of Saint Isidore of Pelusium

Saint Isidore wrote many epistles, even to emperors (Theodosius II, 408-450) and those in authority, summoning them to be mindful of their duties. He commented on many books of the Old and New Testaments of the Bible. He shredded Jewish arguments and errors of interpretation. The gifts of the Holy Spirit were abundantly present in him. The practical philosophy of the disciples of Christ he upheld. He advocated withdrawal from the world, voluntary poverty, and abstinence. He felt that the soul could not discern God in the bustle of everyday life; only in the utmost emancipation from worldly wants could the soul approach divine freedom. He believed, however, that asceticism and flight from the world did not alone suffice: the garland of the virtues must be woven into the monastic conduct. Although our holy father had retired from the world, still he participated in the current needs and perils of the Orthodox. He did not fail in his duty to support and exhort the flock, wherever he could reach with his written words.

Father Isidore, the ascetic and writer, wrote more than three thousand commentaries on theology, dogma, philosophy, Sacred Scripture, and monasticism. He also was not timid to put in writing the specific abuses of each of the clerical ranks. He was instrumental in bringing forth reforms in the Church. He was revered by his contemporaries as a standard of spiritual perfection. Prelates, including Patriarch Cyril of Alexandria, his kinsman, esteemed him as their father. We have two thousand and twelve of his letters,* which reveal the godly Isidore to be a vessel of the Spirit and of great theological learning. His writings are in such eloquent Greek that some enthusiasts wished to have his writings replace the classics in the study of the Greek language. Saint Photios the Great also commends Isidore’s style and erudition. Despite all the acclaim and reverence that surround him during his lifetime, he maintained his prudence and humility. Most of Father Isidore’s writings were collected at the Monastery of the Akoimetoi or Unsleeping Ones at Constantinople. Father Isidore also wrote Patriarch Cyril regarding the hypostatic union, and warned him against contemporary tendencies toward Monophysitism. His epistles were also translated into Church Slavonic. In 433, following the condemnation of Nestorius at the Ephesian Synod, Father Isidore noted a sharp manner in Cyril’s talks with John, Patriarch of Antioch. Isidore counselled his kinsman to make reasonable allowances for the sake of peace in the Church: “As your father,” he wrote, “since you are pleased to address me with this name, or rather as your son, I adjure you to halt the dissension, lest there should result a lasting schism under the pretext of piety.” In his epistles – mostly brief notes, but frequently of great length – it is evident that he was a highly esteemed spiritual counselor, thoroughly enlightened by God. He manifested himself a shepherd of souls and a teacher versed in Scripture.

* Over 2,000 of them are preserved in Volume 78 of Migne’s Patrologia Graeca (PG 78:177-1646); according to some, he wrote over 3,000 epistles, according to others, 10,000. According to the statements of Nicephorus the historian, St. Isidore wrote more than 10,000 letters to various individuals in which he reproached some, counseled some, and comforted and instructed others. In one letter St. Isidore writes: “It is more important to teach by a life of doing good than to preach in eloquent terms.” In another, he says: “If one desires that his virtues appear great, let him consider them small and they will surely manifest themselves as great.” The first and basic rule for St. Isidore was this: “First do, then teach according to the example of our Lord Jesus.”

From The Great Synaxarion of the Orthodox Church (February), translated by Holy Apostles Convent, pp. 119-120.

The Theotokos and the Akathist

Miracle of Saint Basil the Great against the Arians

The “Manna” of Saint John the Theologian