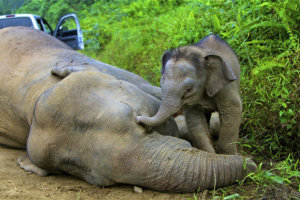 A forlorn and frightened pygmy elephant calf, reaching out its trunk to touch its dead mother.

That’s the heartbreaking scene local authorities came across recently as they patrolled the Gunung Rara Forest Reserve in northeastern Borneo.

The mother was one of 14 elephants, the latest one discovered Thursday, found dead over the past few weeks in the forest reserve. Officials believe they were poisoned, though the cause of death is still being determined.

“Poisoning elephants is a very common practice in these parts of the world,” said Barney Long, the World Wildlife Fund’s Asian species expert. “The elephants are usually poisoned with bait such as pineapple, palm oil or bananas. The poison is fast-acting and can kill up to a whole herd.”

The purpose of poisoning the elephants: to make the land safe for farming.

“This is a very sad day for conservation and Sabah,” said Malaysia’s environment and tourism minister, Masidi Manjun, in a news release. Sabah, one of 13 Malaysian states, is home to Gunung Rara and the remaining pygmy elephants. “The death of these majestic and severely endangered Borneo elephants is a great loss to the state.”

Approximately 1,200 of the endangered pygmy elephants remain in the wild, Long said. The elephants like low-lying, open areas in Sabah where they can feed easily, but they have also been known to roam into plantations and villages where they cause damage and losses to farmers and villagers alike.

Masidi said he has directed the Sabah Wildlife Department, which is in charge of the Gunung Rara Forest Reserve, to set up a joint task force with entities such as the Forestry Department, the forestry group Yayasan Sabah, the World Wildlife Fund and police to investigate these deaths.

“If indeed these poor elephants were maliciously poisoned, I will make sure that the culprits are brought to justice and pay for their crime,” he said in the news release.

The World Wildlife Fund, in a separate statement, said it “is providing support to the Sabah Wildlife Department and is part of the special task force that has been set up by the department to further investigate the matter.”

“Our patrolling teams worked closely with the department in unearthing the incident,” WWF-Malaysia’s executive director, Dionysius S K Sharma, said in the statement.

“The central forest landscape in Sabah needs to be protected totally from conversions” from forest to farmland, he said. “All conversion approvals need to be reviewed by the Sabah Forestry Department and assessed not purely from commercial but the endangered species and landscape ecology perspectives.

“Conversions result in fragmentation of the forests, which in turn results in loss of natural habitat for elephant herds, thus forcing them to find alternative food and space, putting humans and wildlife in direct conflict.”

Holistic, long-term solutions need to be put in place to address and mitigate the problem, Dionysius said.

While the cause of the elephants’ deaths is being investigated, the future of the little calf found by his mother’s side is uncertain. The calf, now named Joe, is said to be in the care of the Sabah Wildlife Department, but officials hope to have him rejoin a herd as soon as possible.