The Teaching of Gregory of Nyssa On the Eternality of Hell 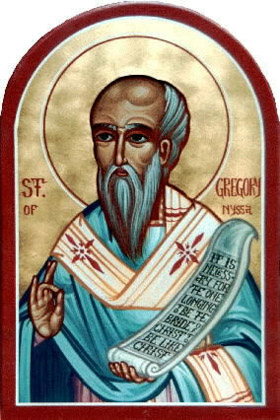 By Metropolitan Hierotheos of Nafpaktos

In many of his texts St. Gregory speaks of man’s freedom of choice, which is not abolished by God, and also about the perpetuity of Hell. Both these positions of his remove every notion of the theory of the restoration of all things as affirmed by Origen.

In his great catechetical oration, in which he refers to the Catechism and the value of Baptism, at the end he continues the subject of the change in a man’s whole existence which comes about by his choice. He writes that holy Baptism is called birth from above, that is, it is man’s rebirth and reconstitution, but it does not alter his characteristic features. This human nature does not of itself admit of any “change by Baptism”, and neither is his reason or intelligence changed, nor his cognition nor any other characteristic of human nature. This must take place through man’s struggle before and after Baptism. The grace of God which we receive through Baptism does not bring about our rebirth unless we ourselves play a part in it.

St. Gregory reaches the point of making a bold statement, as he himself says. If in spite of Baptism the soul has not removed the stains – which means if our life after Baptism is the same as it was before – then the water of the sacrament is simply water, “because the grace of the Holy Spirit did not appear”. In other words, it is as if a man had not received the gift of the Holy Spirit.

Whoever trumpets his rebirth through Baptism, but still has the same way of life should listen to the word of God who says: “If anyone thinks himself to be something, when he is nothing, he deceives himself”and “As many as received him, to them he gave the right to become children of God”. If anyone asserts that he has received God, he must demonstrate it by his choice. “Manifest in yourself Him Who begot you”. And he asks very incisively: “Do you not know that a man becomes a son of God in no other way than by becoming holy?”. To become a child of God one must be holy.

If, again, a person hears about a worm which will devour man, it is meant in a completely different way from the worm that lives in the earth. For “the addition that `it does not die’ suggests the thought of another reptile than that known here”.

From this brief presentation of the teaching of St. Gregory about choice and Hell several truths emerge. First, that the grace of the Holy Spirit, through Baptism, does not regenerate the person if choice is not put into action. Therefore a man’s choice has great significance. Secondly, that there exists Hell, in which fire and worm which do not resemble sensory realities hold sway. They are uncreated realities. Indeed, the fact that the things of eternal life will not be like the present day, and that the worm “does not die”, shows that both the purifying fire and the tormenting action of the worms is the uncreated energy of God, which will be experienced by those who have not been purified in this life. The combination of the pains of the life after death with endlessness shows that there will be no end to purification, as the studies of St. Gregory suggest.

In other texts of his we read about participating in the light, that is, God. Analysing the life of Moses and regarding Moses as a prototype of perfection for every Christian, he says that Moses saw God in the burning bush that was not consumed, because he had first taken off his sandals.

He applies this to the vision of God, which every man can have. God is truth and this truth is light. The life of virtue leads to this knowledge of the great light. And lest it be thought that St. Gregory is speaking of a human and humanistic virtue, we must say that he links virtue with purity of the soul. It is not possible for sandaled feet to ascend that height where the light of truth is seen. Therefore the soul must be freed from these foundations. It is not a matter of putting off the body, but of freeing the soul from the garments of skin in which nature was wrapped after its insubordination. Thus the light of truth will be seen and the knowledge of being will come about through purifying our opinion about nonbeing, since nonbeing is false and a fantasy. According to St. Gregory, being outside God is nonbeing, from the point of view that it is falsehood and fantasy and not that it is non-existent.

And in this interpretation it is obvious that through purification man attains knowledge of being and casts away nonbeing, which is falsehood and fantasy. This interpretation will be useful when we later study his view of evil, which is nonbeing. It does not mean that the person who experiences evil disappears, but precisely because he lives far from being, which is truth, he lives in falsehood. The man exists, but he does not live according to God. There is a difference between existing and living according to God.

St. Gregory of Nyssa links Paradise and Hell with man’s choice. He knows clearly that there is eternal Paradise and eternal Hell. Moreover, even those who are still critical of him do not deny that St. Gregory at many points in his teachings accepts the eternity of Hell. We have already seen one such case before, when he spoke of the worm that never dies. But placed organically within the teaching of the Church, he teaches that Paradise and Hell do not exist from God’s point of view, but from man’s point of view. It is a subject of man’s choice and condition. We can understand the teaching of St. Gregory of Nyssa only if we study it within these orthodox presuppositions.

The same thing happens with other men as well. The same grace, the same light, sends its rays to all men, but some wander in darkness because of evil deeds and the darkness of evil, and others shine, living in the light of virtue.

The Egyptians were punished because their choice worked in that way, when they themselves called forth God’s punishment. “The Egyptians’ free will caused all these things according to the above principle, and the impartial justice of God followed their free choices and brought upon them what they deserved”.

The same is true with tribulations, which we think come from God. The creator of sorrows and tribulations is each person through his own choice. “Each man makes his own plagues through his own free will”. The same will be the case in the eternal life. To the one who has lived without sin there is no darkness, no worm, no fire. The same place is a calamity for one and not for another. This means that it is a matter of their choice. Therefore “it is evident that nothing evil can come into existence apart from our free choice”. Evil cannot exist without our choice.

This analysis shows clearly that St. Gregory does not deny the existence of Hell, but he says that it is a matter of man’s choice. For God, Hell does not exist, nor did God make man for Hell but it is man’s free choice.

In the works of St. Gregory it is stated that evil must be thrown out of man’s existence, and “that which does not exist in being must cease to exist at all”. This does not mean that there will be a period in which beings which have no share and communion with God will cease to exist. In any case, evil does not have being in itself, but it is the deprivation of good. In other words, the person who has been darkened will be deprived of the illuminating quality of God, and so he will be like not existing, while he will live eternally. The illuminating action of God will not be received, but only its caustic and punishing quality. He writes: “Since evil does not exist by its nature outside of free choice, evil will suffer a complete annihilation, because no receptacle remains for it”.

The problem arises: what will happen if man does not yield his free choice to God? This is a question for those who are convinced that St. Gregory teaches the restoration of all things in accordance with the views of Origen. And they think that the saint is inconsistent. But there is no contradiction in his work, his teaching can be understood within the tradition of the Church. It means that everyone who does not give his choice to God will have no share of God. They will exist but they will not participate in God. And since God is life and being, therefore those, although they will exist, will live in nonbeing, they will not have communion with God.

Likewise the existence of the punishing fire, which is the purifying grace of God, will be a permanent development and healing for the saint which will go on also in the next life. The purifying fire, as we have indicated, according to the teaching of St. Gregory of Nyssa, is uncreated and unending. It is the grace of God, which will purify and sanctify man increasingly, since perfection is unending, as he himself teaches. In this sense he speaks of a purifying fire for the righteous.

Consequently the teaching of St. Gregory of Nyssa about Paradise and Hell is a part of the patristic framework. At least I personally have not discovered any departure from the orthodox teaching. It is only that St. Gregory’s speech is more difficult than that of the other Fathers of the Church.

The Eunuch of Queen Candace

“No Saint was loved in the West more than St Catherine”