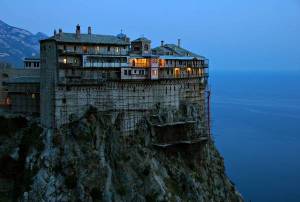 “On December 28, shortly after the Feast of the Nativity, the Church celebrates the memory of St. Simon the Myrrh-gusher through whom the Lord wrought great wonders. A star, like that which led the Magi to Bethlehem, miraculously revealed to the saint the site upon which, by divine command, he was to found a monastery. The monastery was appropriately dedicated to the Feast of the Nativity and was named New Bethlehem. Today, seven centuries later, it is still one of the flourishing monasteries on Mt. Athos.

The life of the venerable Simon was arrayed with mighty ascetic feats and miracles not only during his lifetime, but even after his repose when there gushed forth from his relics are abundant fount of myrrh in a manner similar to that of the Great Martyr Demetrius of Thessalonica. Where he came from, who his parents were, and where he began his monastic labors, no one knows. Some time in the 13th century, he arrived on the Holy Mountaim Recalling the saying of the Fathers that without obedience one cannot be saved, the venerable Simon sought before all else to find a spiritual elder, one to whom he could entrust his soul without reserve, an elder who would be not only a faithful guide unto salvation and a radiant model of ascetic perfection, but also strict in bodily discipline.

After looking all over the Holy Mountain, he finally chose out of the multitude of monks leading virtuous lives, an unknown elder, perfect in all respects in the ascetic life. He labored in complete submission to his elder, fulfilling all his obediences with love and zeal and soon attained to such great spiritual heights that he became known all over the Holy Mountain for his irreproachable life. Finally. the time came when the elder was convinced that his period of trial was over. Casting aside his paternal kindness towards the venerable Simon, he decided to dwell with him. as with a brother and on several occasions he even asked for his advice and counsel.

But instead of rejoicing over the benevolence and honor bestowed upon him by his elder, Simon was utterly grieved. He decided to leave, seeking for himself total reclusion. Expressing his intention to his elder, he asked his blessing amidst a shower of tears, desiring with heartfelt sorrow that the elder would grant his consent. In this way, he took leave of his dear elder for whom he had already become not so much a disciple as another mighty co-struggler in the angelic life.

One night, while persevering in prayer, the righteous one saw outside his cave, as if before his very eyes, the effulgence of a divine light; an ineffable fragrance spread all around him and he heard a loud voice: “Simon, Simon, thou faithful friend and servant of my Son! Do not go away from here. I shall glorify this place; you shall be its guiding light, and your name shall be glorified.” Out of caution, Simon chose at first not to believe this vision, not desiring to fall into the nets of the evil one; for he knew, according to the word of the Apostle, that satan could transform himself into an angel of light. Neyertheless, he continued to ponder upon the actual source of the voice. This took place shortly before the Feast of the Nativity of Christ. Then, one night, walking outside his cave, he saw a strange apparition: a star descended from the heavens and came to rest just above the rocky cliffs where later the holy monastery was to be situated. This same vision repeated itself on the following evenings; but the venerable Simon was still fearful. Wasit possible that this was solely one of the consequences of his intense spiritual warfare? And he continued to distrust the vision.

When the Eve of the Nativity of Christ arrived, he saw in a dream a brilliant star and heard a divine voice: “Simon! you must build a monastic dwelling here. I myself shall help you. Cast aside your doubts, or you shall be punished for your unbelief.” The same voice spoke to him three times. At that time (as he later related to his disciples) it seemed to him that he was in Bethlehem of Judea, in the very place where the shepherds were tending their flocks, and he heard the sweet sound of angelic singing: “Glory to God in the highest, and on earth peace, good will toward men: fear not, for, behold, I bring you tidings of great joy, which shall be to all people” (Luke2:l4, 10). After this, said the saint, all fear and uneasiness were dispelled from my soul and I rejoiced in spirit, and secretly beheld the scene in Bethlehem; there, before the manger, the Sovereign Lady stood before the Divine Child, lying in swaddling clothes.

Several days after the Feast of the Nativity, three rich men, brothers after the flesh, came to the venerable one. They confessed all their sins and began persuasively to entreat him to permit them to live in obedience under his direction. After a brief period of trial and testing, St. Simon revealed unto them, as to his own sons according to the spirit, the divine vision. More than once he related to them the v i s i o n concerning the building of a monastery on the neighboring cliffs, asking them not to speak of this to any, one while he was still alive until the proper time. Hearing all this, the brothers with love offered to the saintly elder all of their earthly wealth for the construction of the monastery, and in accordance with the saint’s wish and blessing, they offered immediately to prepare everything necessary for such an important and God-pleasing labor.

All necessary preparations were made. They had yet to learn, however, of the exact site for the foundation upon which the monastery was to be built. When St. Simon directed the brothers to the location where the church and other buildings were to be constructed they w e r e horrified, seeing t h e sheer cliffs which, according to his orders, were to serve as the monastery’s foundation. “Are you trying to fool us, Abba?” they asked the saint, ‘or are you speaking the truth? How can this be the site, when that cliff might be quite dangerous for the workers and even more so for those that will dwell here. If this is your desire, we shall surely oppose you !”

The matter was left undecided. In the meantime, seeing that he could not convince them to proceed with the work, St. Simon ordered the trapeza meal to be served. While they were eating, one of the saint’s disciples who was bringing wine to the table, lost his , balance ,through the prompting of a demon, and fell off the cliff into a great abyss; still holding in one hand a pitcher and in the other several glasses of wine. Stricken with horror at this sudden tragedy, the spokesman of the brothers strongly rebuked the venerable one: “Behold, Abba, what has already been wrought by these deadly crags before you have even begun your undertaking. How many similar incidents of such a frightful death will occur if we should agree to build the monastery here.” The saint did not answer but secretly prayed to the Sovereign Lady Theotokos that he would not be put to shame in placing his trust in her intercession. “Who can tell of all thy miracles, O Sovereign Lady, and who can praise thy majesty?’ What happened next was entirely unexpected: the brother who had fallen over the precipice suddenly appeared before them. Through the intercession of the Most Holy Theotokos he was not only perfectly whole and unscathed, but he even held the glasses and pitcher from which not a drop of wine had spilled! Such a miracle brought fear and trembling upon the laborers. They fell to their knees before the saint and beseeching forgiveness said: “Now we know, O father, that you are truly a man of God.” With heartfelt sincerity they were all grateful to be numbered among the saint’s disciples and were soon accounted worthy of the angelic habit. Then, under the immediate supervision of the venerable Simon himself, his disciples, formerly simple laborers, proceeded with the construction of the Monastery.

The situation, however, was such that before anything else it was necessary to lay the foundation. According to the instruction of the saint, they were to use a nearby stone of enormous size. The elder ordered them to move it, but they, forgetting about the miracle of the unspilled wine, were of the firm opinion that not only was it impossible for them with their combined efforts to move that massive weight, but that it could not even be budged. They stood there bewildered, not having the slightest idea what to do. Seeing this, the saint approached them and, making the sign of the life-giving Cross on the stone, he single-handedly lifted it upon his shoulder and carried it to the designated site. In this way he demonstrated in actual fact the truth of the word which the Lord spoke unto the Apostles: “Verily I say unto you, if ye have faith as a grain of mustard seed, ye shall say unto this mountain, Remove hence to yonder place; and it shall remove” (Matt. 17120).

That such a man, whose body was weakened by fasting and ascetic labor, should lift such a weight far exceeding human strength, can only serve as a testimony of God’s almighty power and His readiness to help those who turn to Him with faith.

Having established the monastery which he named New Bethlehem, and having spent his life in God-pleasing labors, St. Simon reposed on the 28th of December, 1287. On the morning of the next day, in the presence of the entire brotherhood, the face of the righteous one shone with a wondrous light. After his soul had ascended unto the choirs of the righteous, a fragrant myrrh issued forth from his holy relics through which St. Simon worked many miracles to the glory of God, for kings, monks, and laymen.

Many years after the saint’s earthly departure, a pious Serbian king helped to greatly enlarge and rebuild the monastery in honor of its founder. Since that time it has been known as Simonopetra, or the “Rock of Simon”. Today it is perhaps one of the most awe-inspiring architectural monuments in the world, a standing testimony to the power of faith and God’s good will toward men.”

The Monastery of Simonos Petra

The monastery is located on the south-west shore of the Athos peninsula. It was built by Saint Simon in the beginning of the 14th century on a sheer cliff rising 230 meters above the sea.

It occupies thirteenth rank in the hierarchical order of the twenty Athonite monasteries. It is inhabited by 80 monks (1990) and is coenobitic (communal).

Its majestic building is seven-storeyed. It has thrice been destroyed by fire, in the 14th and 17th centuries and in 1891. Most of the monastery’s documents, books, liturgical vessels and chrysobulls were destroyed in the fire, while the most recent disaster burnt down the katholikon and the library.

The monastery’s rebuilding began in 1891 aided by the generosity of the Russian Tsars. The katholikon is dedicated to the Birth of Christ, maintains the Athonite architecture and contains certain parts of the old building. It is a small church and it is not frescoed yet.

The monastery features four chapels inside its precinct and eight more outside. Within the predinct are the chapels of Saint Mary Magdalene, Saint Charalambos, the Archangels and Saint George.

The treasury and the library do not feature noteworthy treasures of the past due to the numerous disasters, but today’s library is admirably organised and features modern books and periodicals related to the sciences.

How should we attend the Divine Liturgy?

Clean Monday and the First Week of Great Lent