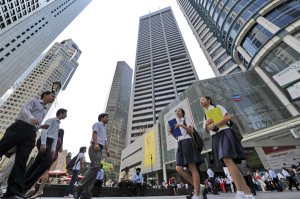 Singaporeans were least likely to report having positive emotions– despite the fact that they enjoy one of the highest per capita GDP values in the world.

The international pollster measured “positive emotions.” Carried out last year in 148 countries, the survey asked around 1,000 persons in each country five questions about what positive experiences people had had the day before: if they had been well-rested, treated with respect, if they smiled or laughed a lot, and whether they’d done or learnt something interesting.

In Singapore, only 46% of the interviewed answered “yes” to these questions, compared with 55% reported from people in Haiti and Afghanistan. Even in Syria, where the uprisings that later developed into a civil war took place in 2011, 60% of the people asked answered yes to the survey’s questions.

Economists in the United States have found that domestically, income only affects daily happiness when earning up to $75,000 annually. A higher income than that doesn’t make much of a difference for American citizens’ well-being, Gallup wrote.

The population that reported the most positive emotions was Panama, a country with a per capita GDP ranking 90th in the world. In fact, eight out of the 10 happiest countries in the survey are located in Latin America.

As for Singapore, this is not the first time it has come in last in a Gallup poll.

Last month, Singapore ranked as the least emotional country, which measured the daily emotions of people in 150 countries during a three-year period.

The Philippines shows the world how to celebrate Christmas

Why I came ‘home’ to India